The benefits of grapefruit against excess cholesterol have been confirmed by Jonathan Goldwasser’s team at the Center for Engineering in Medicine in Boston, Massachusetts. According to his work, naringenin – a flavonoid, a substance that has strong antioxidant properties – is at the origin of its cholesterol-lowering activity. And it would work like several classes of medications currently prescribed to control cholesterol levels in the blood. According to the researchers, it could, therefore, be used as a dietary supplement and “find its place naturally in the routine treatment of hyperlipidemia”. An idea that they present as “attractive”, this product “nontoxic and inexpensive” has, in addition, anti-inflammatory effects. 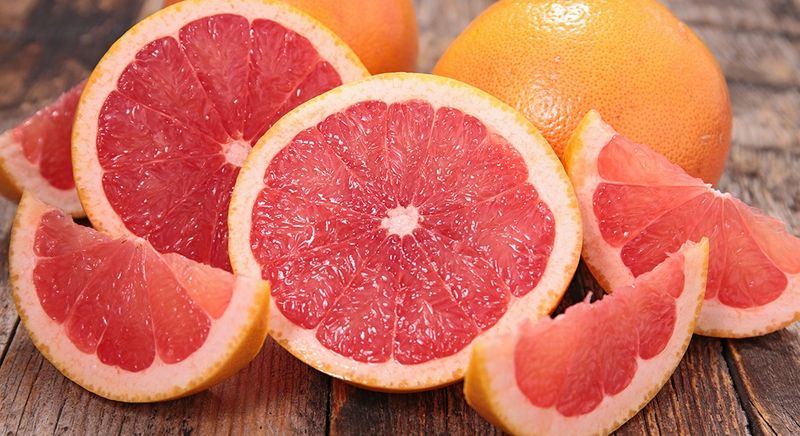 The hypocholesterolemic properties of naringenin, which is responsible for the bitter taste of grapefruit, have already been demonstrated in animal models, but also in a small clinical study cited by researchers: in about thirty hypercholesterolemic patients, this substance has reduced by 17% LDL-cholesterol (the “bad” cholesterol). This decline is certainly lower than that obtained by current treatments, but it is significant. In trying to identify its mechanism of action, they saw that naringenin was acting on targets identical to those of fibrates (which lower the level of fat in the blood) and statins (against cholesterol).

According to research carried out by a group of scientists from the Brock University of Canada and published in Biochemical and Biophysical Research Communications, it is suggested that:

– Naringenin stimulates the liver to destroy the excess fats present in the body, which causes a reduction in the concentration of LDL cholesterol. In addition, the high fiber content of grapefruit traps and helps eliminate excess cholesterol consumed through food.
– It thins the blood and increases anticoagulant activity by reducing the likelihood of cardiovascular diseases.
– It increases the antioxidant activity in the blood, avoiding the synthesis of free radicals and the formation of atheromas in the arterial walls.
– Naringenin also increases the entrance of fats to the cells to be burned and converted into energy.
– It increases sensitivity to insulin, which adds other health benefits such as controlling blood sugar levels. Through this mechanism, the formation of endogenous cholesterol from other substances such as glucose is also avoided.

Naringenin can also be found in orange, tangerine, and lemon, although it is in grapefruit, and specifically in red grapefruit (it is characterized by having yellow skin and red pulp) where it is in higher concentration.

How to take grapefruit to decrease cholesterol?

Being a natural remedy and not a medication there are no standardized amounts that offer the same benefits to all people but as a general rule, it can be said that drinking the juice of a grapefruit per day should be enough to reduce cholesterol levels. If your cholesterol is very high you can increase the amount and drink the juice of two grapefruits, but it is always advisable to start with a grapefruit a day.

Juice or fruit? Fresh grapefruits of any color contain about the same amount of vitamin C as their juice. In both forms, they are excellent sources of this vitamin that would contribute 66% to 77% of the antioxidant potential of grapefruit juice. However, by consuming the fruit, you will take advantage of its richness in the soluble dietary fiber pectin which is found mainly in the white layer that is just under the skin of the fruit. Pectin naturally lowers cholesterol and promotes digestive health. Therefore, it would be better to eat grapefruit instead of just drinking the juice to maximize is cholesterol-reducing potential.

Other benefits of grapefruit

Several studies have shown that the consumption of citrus fruit, including grapefruit, is linked to the prevention of certain types of cancer, such as esophageal cancer, stomach cancer, cancer of the colon, mouth, and pharynx. According to one of these studies, moderate consumption of citrus fruit (ie 1 to 4 servings per week) would reduce the risk of cancers affecting the digestive tract and the upper respiratory system. With specific regard to pancreatic cancer, studies, however, remain controversial.

Antioxidant compounds in citrus fruits (limonoids) have demonstrated anti-cancer effects in vitro and in animals. They could decrease the proliferation of cancer cells of the breast, stomach, lung, mouth, and colon.

In obese individuals with Metabolic Syndrome, eating grapefruit (half a day before each meal for 12 weeks) resulted in significant weight loss compared to a control group (1.6 kg vs. 0.3 kg). It also significantly reduced their insulin resistance. In diabetic animals, naringin supplementation (a flavonoid grapefruit) allowed significantly reduce the glucose blood. This compound may play a role in preventing hyperglycemia.

Several studies have shown that grapefruit flavonoids have anti-inflammatory properties. They would inhibit the synthesis and activity of mediators involved in inflammation (arachidonic acid derivatives, E2, F2 prostaglandins and A2 thromboxanes).

Watch out for drug interactions!

Grapefruit is an excellent food for your health, but if you are on medication it would be prudent to inform you of a possible interaction. It seems that the naringin in grapefruit neutralizes an enzyme that helps metabolize certain drugs. When the drug is not metabolized quickly, a larger amount is absorbed into the body, which multiplies the effects. The naringin would not be present in any other fruit, at least not in the same proportions. The list of drugs affected by grapefruit is constantly growing, so it is safer, when you are on medication, to seek advice from your pharmacist or in case of doubt to avoid the consumption of grapefruit.

Understanding the Cholesterol Ratio You certainly know about the total cholesterol and that a level below 200 mg/dL is the ideal. But, did you know that your level can be above 200 and have no impact on your health? The total cholesterol number itself alone does not say much. You may have a cholesterol level… END_OF_DOCUMENT_TOKEN_TO_BE_REPLACED

Non-HDL cholesterol: What is it? What are the Ideal Levels? The use of the non-high density lipoprotein (non-HDL cholesterol or non-HDL-C) has been suggested as a better tool to predict death from cardiovascular disease. Generally, when both your total cholesterol and your low-density lipoproteins (LDL) levels are high, your risk of cardiovascular disease is high… END_OF_DOCUMENT_TOKEN_TO_BE_REPLACED

Sugar and Cholesterol: What You May Not Know! Because of its particular and irresistible taste, when you start eating sugar, you usually want to consume it more and more until you’re full and you have a stomach ache. Yet, sugar is a very bad food for health when consumed in excess. The problem is that… END_OF_DOCUMENT_TOKEN_TO_BE_REPLACED

Is smoking bad for blood cholesterol levels? Smoking is the most important avoidable risk factor, responsible for the death of many people, which not only affects lung integrity but also alters blood cholesterol levels. Smokers are at high risk of certain diseases derived from smoking. According to the World Health Organization (WHO), four million tobacco-related… END_OF_DOCUMENT_TOKEN_TO_BE_REPLACED

Omega-3 Fish Oil Benefits For Blood Cholesterol And Beyond More and more people stand up for the consumption of natural products. In this sense, fish oil has gained a great popularity in recent years due to the incredible benefits it produces for health. This is mostly because of the goodness of its high content of… END_OF_DOCUMENT_TOKEN_TO_BE_REPLACED

Coffee and Cholesterol Coffee is cholesterol-free like all plants foods. But does its consumption affect blood cholesterol levels? Let’s find out! Coffee is a popular beverage to which various health effects are attributed. Its nutritional value is probably not one of its most remarkable qualities since coffee has hardly any calories and its content in… END_OF_DOCUMENT_TOKEN_TO_BE_REPLACED

Calculating Your Total Cholesterol Level in 5 Simple Steps Cholesterol is essential for the metabolism of the human body. It helps the body repair cell membranes, make vitamin D, produce hormones and much more. However, high levels of this in the blood can increase the risk of developing coronary heart disease and subjecting to heart… END_OF_DOCUMENT_TOKEN_TO_BE_REPLACED

Diet Plan to Treat Hypercholesterolemia: Foods to Avoid and to Eat Healthy eating is key in the treatment of hypercholesterolemia and in the prevention of atherosclerosis. Hypercholesterolemia consists of the presence of cholesterol in the blood above levels considered normal. This increase, which is associated with coronary problems, depends on diet, lifestyle, gender, endogenous synthesis.… END_OF_DOCUMENT_TOKEN_TO_BE_REPLACED

Eggs and Cholesterol: Should You Worry About Eating Eggs? A medium-sized egg contains about 200 mg of cholesterol, equivalent to 66% of the recommended daily intake. But should you worry about eating eggs? Let’s take the myth of eggs and cholesterol away. We explain how cholesterol is regulated by our body and we reveal the… END_OF_DOCUMENT_TOKEN_TO_BE_REPLACED

Nuts and cholesterol Do not forget to put nuts on your salads, in your muesli or snacking on them. The nuts already have an excellent reputation. Their consumption would divide by 4 the risk of developing type 2 diabetes, reduce the risk of cardiovascular disease and improve fertility. A new study tells us that these… END_OF_DOCUMENT_TOKEN_TO_BE_REPLACED

Although we base our articles on recent scientific researches, the content on CholesterolMenu.com should not be considered as medical advice or a recommendation for medical treatment, but as educational and informational articles that are strictly the personal opinion of CholesterolMenu.com's authors. As the reader, you are recommended to consult your doctor to discuss any health issues and treatments. We shall not be held responsible or liable for possible health consequences from following the information in our articles.